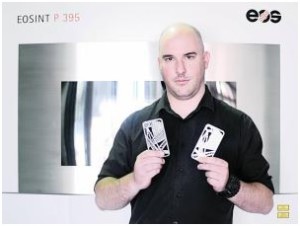 David Mauchline, manager of additive manufacturing at the Vaal University of Technology, presented a career talk to a group of learners at Africa Engineering Week, Mangosuthu University of Technology in KwaZulu-Natal, on 28 September 2015. He also participated in a Science Cafe Talk, where he addressed an audience of professional engineers and other role players in the engineering industry.

Mauchline spoke at both events on behalf of Prof Deon de Beer, Chief Director: Technology Transfer and Innovation at North West University. Prof de Beer won the 2014/15 NSTF Award for research leading to innovation, by a team or individual through a corporate organisation.

The topic of Mauchline’s talk was additive manufacturing (AM), which he described as ‘industrial 3D printing’, a powerful technology with remarkable potential in the development of new solutions, materials and economy.

AM is a very different way of making things – objects are built up by adding material, instead of machining material away. Components can be made to exact specifications.

Products of laser-additive manufacturing include textiles, shoes (especially soles), and applications in medicine (such as reconstructing missing or damaged body parts by creating artificial bones) and aviation technology, such as the Advanced High-Performance Reconnaissance Light Aircraft (AHRLAC), designed and built in South Africa by Aerosud in partnership with the Paramount Group.

During the career talk, learners wanted to know more about the advantages of AM; Mauchline explained that it made operations significantly shorter and cheaper.

Mauchline also paid tribute to Prof de Beer, whom he was representing, and described him as “the father of additive manufacturing in South Africa”.

Concluding his career talk, Mauchline showed the NSTF video of the making of the NSTF Awards trophy, which was 3D-printed by the National Laser Centre, using titanium. Learners had the opportunity to handle the actual trophy and experience the end-product of this amazing technology first-hand.